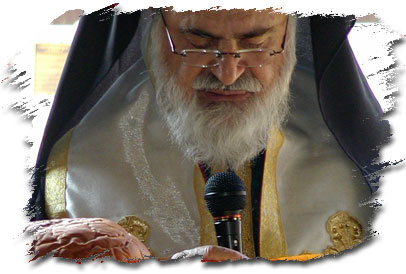 His Eminence Metropolitan Maximos (Aghiorgoussis) was elected in March 1979, and enthroned as the first bishop of the Greek Orthodox Metropolis (then Diocese) of Pittsburgh on April 27, 1979, serving until his retirement in August of 2011.

His Eminence was born on the island of Chios on March 5, 1935, to Father and Presvytera Evangelos Aghiorgoussis. He studied at the Patriarchal Theological School of Halki where he received his degree in Orthodox Theology in 1957. He was ordained a deacon in Halki on April 28, 1957, and ordained a priest on his native island on July 26, 1959. He pursued graduate studies at the University of Louvain, Belgium, where he received a Doctorate in Theology and Baccalaureate in Philosophy in 1964.  His Eminence is fluent in French and Italian, in addition to Greek and English, and has authored

publications in each language.

In 1966 he arrived in the United States and was appointed Professor of Systematic Theology at the Holy Cross School of Theology in Massachusetts where he remained until May 1979. During his tenure at the school, he also served as Vice President of Hellenic College and Academic Dean of the Holy Cross School of Theology, as well as Chairman of the Faculty Senate. From September 1979 to June 1985, His Eminence served as Professor of Systematic Theology at Christ the Saviour Theological Seminary in Johnstown, Pennsylvania. He is now visiting professor of Theology at that institution. As of September 1991, the Metropolitan was also a trustee of St. Vladimir's Theological Seminary in Crestwood, New York.

On April 11, 1978, the Holy Synod of the Ecumenical Patriarchate elected him Bishop of Diokleia. Archbishop Iakovos consecrated him to the Episcopacy on Pentecost Sunday, June 18, 1978, at the Archdiocesan Cathedral of the Holy Trinity in New York City.

Upon the repose of Bishop Kallistos of Zelon (+1991), Metropolitan Maximos accepted the responsibility of spiritual father and advisor of Orthodox People Together (OPT). He also served as advisor to the organizing committee of the Pan-Orthodox Conference on Mission and Evangelism.

The Metropolitan put special emphasis on youth ministry, religious education, monasticism, and spiritual life and renewal. The Diocese sponsored the first Orthodox Christian Mission to Indonesia. The St. Gregory Palamas Monastery, a men's monastery, was founded in 1981. Two monasteries for women were also established: The Holy Nativity of the Theotokos Convent, with the St. Elias Retreat Center, in 1989; and The Holy Protection of the Theotokos Convent in 1994.

Metropolitan Maximos has participated in various National Council of Churches of Christ (NCCC) missions, including the fact-finding mission of a Blue Ribbon NCCC Panel to the Middle-East (February-March, 1980), a courtesy visit of an NCCC special delegation to the People's Republic of China (November 1981), a similar visit of an NCCC delegation to the USSR (October 1984), a World Council of Churches (WCC) mission to Lebanon at the time of the Israeli invasion (July 1982), and a peace conference in Karlovy Vary, Czechoslovakia (December 1984). The Metropolitan also joined the Patriarchal delegation to the Sixth General Assembly of the WCC in Vancouver, Canada (July-August, 1983), and served on the Nominating Committee of the same.

In June 1988, His Eminence returned to the USSR and Czechoslovakia for the celebration of the Christian Millennium in the land of Kievan Rus. In April-May, 1992, the Metropolitan took part in a WCC fact-finding mission to Bielorussia and the Ukraine. The purpose of the mission was to study the problem of Uniatism and to report his findings to the appropriate WCC Committee. In October 1992, Metr. Maximos represented the Ecumenical Patriarchate at the Fourth Conference of theRoman Catholic Latin American Bishops (CELAM) in Santo Domingo, the Dominican Republic.

His elevation to the ecclesiastical rank of Metropolitan of Ainou by the Holy and Sacred Synod of the Ecumenical Patriarchate of Constantinople was announced on November 24, 1997, by His All Holiness Bartholomew, Archbishop of Constantinople, New Rome and Ecumenical Patriarch, "to reward his lengthy and dedicated service, without taking him away from the pastorship of the Holy Diocese of Pittsburgh."  On December 20, 2002, the Diocese was elevated to a Metropolis, and His Eminence was made "Metropolitan of Pittsburgh," by the Synod of the Ecumenical Patriarchate.

On August 3, 2011, His Eminence submitted his resignation as Metropolitan of Pittsburgh to Archbishop Demetrios of America, due to health reasons. His resignation was approved by the Holy Synod of the Ecumenical Patriarchate by August 30.  Metropolitan Maximos passed into eternal life on Monday, November 2, 2020, and has been interred at St. Gregory Palamas Monastery near Perrysville, Ohio.