A father of desert monasticism; patron Saint of our Metropolitan. 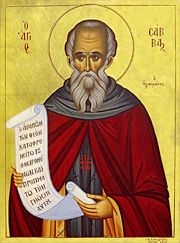 Saint Savas the Sanctified (439–532), a Cappadocian-Greek monk, priest and saint, lived mainly in Palaestina Prima. He was the founder of several monasteries, most notably the one known as Mar Saba. The Saint's name is derived from the Hebrew meaning "old man".  St. Savas was born at Mutalaska, near Caesarea of Cappadocia, the son of John, a military commander, and Sophia.

Journeying to Alexandria on military matters, his parents left their five-year-old son in the care of an uncle. When the boy reached eight years of age, he entered the nearby monastery of Bishop Flavian of Antioch. The gifted child quickly learned to read and became an expert on the Holy Scriptures. In vain did his parents urge St. Savas to return to the world and enter into marriage.

When he was seventeen years old he received monastic tonsure. After spending ten years at the monastery of Bishop Flavian, he went to Jerusalem, and from there to the monastery of Saint Euthymius the Great. But Euthymius sent the saint to Abba Theoctistus, the head of a nearby monastery with a strict cenobitic rule. St. Savas lived in obedience at this monastery until the age of thirty.

After the death of the Elder Theoctistus, his successor blessed St. Savas to seclude himself in a cave. On Saturdays, however, he left his hermitage and came to the monastery, where he participated in divine services and ate with the brethren. After a certain time St. Savas received permission not to leave his hermitage at all, and he lived in isolation in the cave for five years.

Euthymius attentively directed the life of the young monk, and seeing his spiritual maturity, he began to take him to the Rouba wilderness with him. They set out each January 14 and remained there until Palm Sunday. Euthymius called the saint a child-elder, and encouraged him to grow in the monastic virtues.

When Euthymius died (c. 473), St. Savas withdrew from the lavra (a cluster of cells or caves for hermits, with a church and sometimes a refectory at the center) and moved to a cave near the monastery of St. Gerasimus of Jordan. After several years, disciples began to gather around St. Savas, seeking the monastic life. As the number of monks increased, the Great Lavra sprang up. The traditional dating of the founding of this lavra in the Kedron Valley, south of Jerusalem, is 484. Because some of his monks opposed his rule and demanded a priest as their abbot, the opposition continued and he withdrew to the New Lavra which he had built near Thekoa. In the lavras the young monks lived a cenobitical life, but the elders a semi-eremitical one, each in his own hut within the precincts of the lavra, attending only the solemn church services.

A strenuous opponent of the Monophysites and the Origenists, he tried to influence the emperors against them by calling personally on Emperor Anastasios I at Constantinople in 511 and on St. Justinian I in 531.

St. Savas founded several more monasteries. Many miracles took place through the prayers of Savas: at the lavra a spring of water welled up, during a time of drought they received abundant rain, and there were also healings of the sick and the possessed.

Patriarch Salustius of Jerusalem ordained him in 491 and appointed him archimandrite of all the monasteries in Palaestina Prima in 494. The saint composed the first monastic rule of church services, the so-called Jerusalem Typikon, for guidance of all the Byzantine monasteries. He died in the year 532. His feast day is on December 5.

St. Savas' relics were taken by Crusaders in the 12th century and remained in Italy until Pope Paul VI returned them to the monastery in 1965 as a gesture of good will towards the Orthodox.  His Great Lavra long continued to be the most influential monastery in those parts, and produced several distinguished monks, among them St John of Damascus. It is now known as the monastery of Mar Saba. The church of San Saba in Rome is dedicated to him.