Patriarch of Constantinople, Defender of the Christian Faith, Patron Saint of our Metropolis 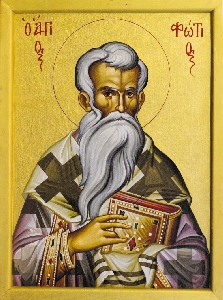 Patriarch St. Photios I (Greek: Φώτιος, Phōtios; c. 810 – c. 893) was the Ecumenical Patriarch of Constantinople from 858 to 867 and from 877 to 886.  St. Photios is widely regarded as the most influential Patriarch of Constantinople since John Chrysostom, and as the most important intellectual of his time. He was a central figure in both the conversion of the Slavs to Christianity and the so-called Photian schism.

St. Photios was a well-educated man from a noble Constantinopolitan family. His great uncle was the previous Patriarch of Constantinople, St. Tarasios.[3] He intended to be a monk, but chose to be a scholar and statesman instead. In 858, Emperor Michael III (r. 842–867) deposed Patriarch Ignatius of Constantinople, and Photios, still a layman, was appointed in his place.[4] Amid power struggles between the pope and the emperor, Ignatius was reinstated.[4] St. Photios resumed the position when Ignatius died (877), by order of the emperor.[4] The new pope, John VIII, approved St. Photios's reinstatement.[5]

Little is known of Photios's origin and early years. It is known that he was born into a notable family and that his uncle St. Tarasios had been the Patriarch of Constantinople from 784–806 under both Empress Irene (r. 797–802) and Emperor Nikephoros I (r. 802–811).  During the second Iconoclasm, his family suffered persecution since his father, Sergios, was a prominent iconophile. Sergios's family returned to favor only after the restoration of the icons in 842.  Although St. Photios had an excellent education, we have no information about how he received this education. The famous library he possessed attests to his enormous erudition (theology, philosophy, grammar, law, the natural sciences, and medicine).  St. Photios says that, when he was young, he had an inclination for the monastic life, but instead he started a secular career. St. Photios became a captain of the guard (prōtospatharios) and subsequently chief imperial secretary (protasēkrētis). At an uncertain date, St. Photios participated in an embassy to the Abbasids of Baghdad.

St. Photios's ecclesiastical career took off spectacularly after Caesar Bardas and his nephew, the youthful Emperor Michael, ascended the throne in 856. In 858, Bardas found himself opposed by the then Patriarch Ignatios, who refused to admit him into Hagia Sophia, since it was believed that he was having an affair with his widowed daughter-in-law.  In response, Bardas and Michael engineered Ignatios's deposition and confinement on the charge of treason, thus leaving the patriarchal throne empty. The throne was soon filled with St. Photios himself; he was tonsured on December 20, 858, and on the four following days he was successively ordained lector, sub-deacon, deacon and priest. He was consecrated as Patriarch of Constantinople on Christmas.

The deposition of Ignatios and the sudden promotion of St. Photios caused scandal and ecclesiastical division on an ecumenical scale as the Pope and the rest of the western bishops took up the cause of Ignatios.  Pope Nicholas I, as senior patriarch, sought to involve himself in determining the legitimacy of the succession. His legates were dispatched to Constantinople with instructions to investigate, but they acquiesced in the confirmation of his election at a synod in 861. On their return to Rome, they discovered that this was not at all what Nicholas had intended, and in 863 at a synod in Rome the pope "deposed" St. Photios, and "reappointed" Ignatius as the rightful patriarch. Four years later, St. Photios was to respond on his own part by calling a Council and excommunicating the pope on grounds of heresy – over the question of the double procession of the Holy Spirit. The situation was additionally complicated by the question of papal authority over the entire Church and by disputed jurisdiction over newly-converted Bulgaria. As St. Photius had been targeted by Pope Nicholas to be removed from his position and to be subjected to unjust vitriolic attacks with charges of ambition for power.

This state of affairs changed with the murder of St. Photios's patron Bardas in 866 and of Emperor Michael III in 867, by his colleague Basil the Macedonian, who now usurped the throne. St. Photios was deposed as patriarch because Basil I was seeking an alliance with the Pope and the western emperor. St. Photios was removed from his office and banished about the end of September 867, and Ignatios was reinstated on November 23. St. Photios was condemned by the Robber Council of 869–870.

Not long after his condemnation, St. Photios had reingratiated himself with Basil, and became tutor to the emperor's children.  Following Photios's recall to Constantinople, Ignatios and the ex-patriarch met, and publicly expressed their reconciliation. When Ignatios died on October 23, 877, it was a matter of course that his old opponent replaced him on the patriarchal throne three days later.  St. Photios now obtained the formal recognition of the Christian world in a council convened at Constantinople in November 879. The patriarch stood firm on the main points contested between the Eastern and Western Churches: the demanded apology of the Pope, the ecclesiastical jurisdiction over Bulgaria, and the cessation of the filioque clause into the Nicene creed.

The emperor Basil died in 886 injured while hunting, according to the official story. Leo VI, who became an emperor, dismissed St. Photios, although the latter had been his tutor.[20] St. Photios was replaced by the emperor's brother Stephen, and sent into exile to the monastery of Bordi in Armenia.  Photios continued his career as a writer during the reign of Emperor Leo VI, until his death.  St. Photios' feastday, the day of his passing on from this life into the heavenly company, is February 6.